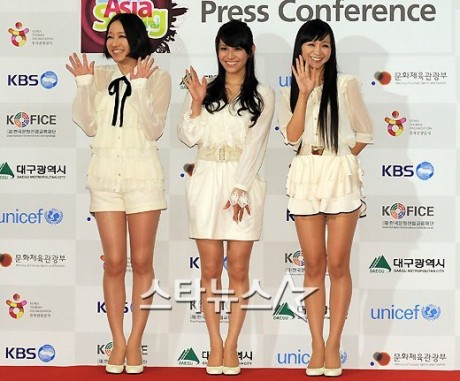 Japanese girl group Perfume recently attended a press conference on the 14th for the 2011 Asia Song Festival (ASF) held at the Inter-Burgo Hotel in Daegu.

The girls who were at the event representing Japanese artists revealed, “We met SNSD at a music program we both participated in and we became close. We e-mail each other from time to time.”

They continued, “We’re also close with KARA. We threw a party before coming to Korea for the ASF and invited KARA to join us… KARA suggested we introduce ourselves at the ASF in Korean but we’re not sure if we can do it well. Ji young cheered us on a lot before we came.”

Perfume is a popular Japanese group who have sold at least 300,000 copies of each of their albums since 2008.

The Asia Song Festival is a large banquet held for the top artists of 6 different Asian nations, and this year is especially noteworthy as both the ASF and the ‘World Athletic Championships‘ are being held for the first time in the city of Daegu. Singer G.NA was invited to the ASF as an ‘Influential Artist of Asia‘.

Other artists such as Super Junior, SNSD, Lee Seung Gi, B2ST, miss A, U-KISS, will attend the festival to commemorate the event. Perfume and AAA from Japan, Peter Ho from Taiwan, Leo Ku from Hong Kong, Bibi Chow from China, and Tata Young are also scheduled to perform at the festival. The festival will be held at Daegu Stadium on October 15th.