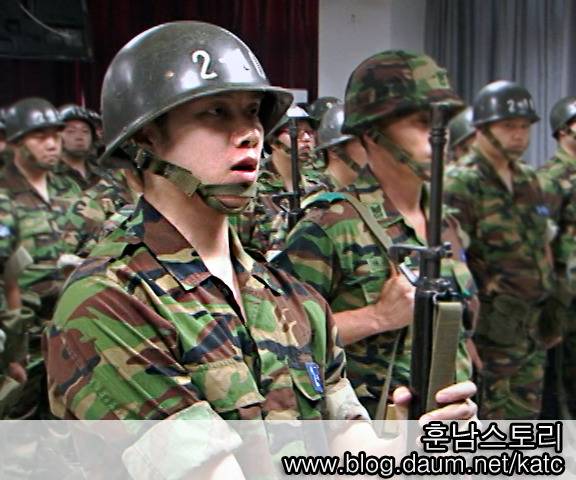 Super Junior‘s Kim Heechul recently sat down for a video interview about his experience with the Korean military thus far.

When asked about what kind of training he was receiving at the time, Heechul replied that he was learning how to quickly and safely move from one area to another, and how to move across bodies of water.

Before enlisting in the military, he had genuine concerns about how well he would adjust, especially since he underwent leg surgery fairly recently. He was also concerned about how he would get along with his fellow comrades, and how well he would communicate with his superiors. “It was definitely awkward in the beginning,” he said. “It was even weird just looking at my reflection in the mirror. But contrary to what I had thought, everyone is really friendly and the environment is nowhere near as hostile as I thought it would be. I don’t think my fans need to worry, I’m adjusting pretty well.”

“Although my leg isn’t fully recovered, I don’t want people to think I’m slacking off because of that or that I’m taking it easy just because I’m a celebrity. I actually run a little faster and train a little harder. My superiors even tell me to take care of my health first, but I mean, I’m a soldier in training just like everybody else. And besides, there’s a clinic here that I can access if need be.”

The best part of military training? According to Heechul, it’s shooting a M-16 rifle. He bragged, “I think I shoot really well; I’m on point. I’ve been complimented by my superiors.”

Heechul also talked about how before he enlisted, he never had time to gaze at the stars. Now he’s able to look up to his heart’s content, and as he trains and works the night shift, he has the chance to converse freely with his fellow soldiers. “I completely respect all of our soldiers here. A lot of them are here to train for longer than I am,” he said.

“Letters from our Super Junior fans are helping me get through the training period. It’s definitely different getting them here, as opposed to getting them comfortably at home,” he admitted.

Heechul once said he was a fan of Sohee from the Wonder Girls, and his thoughtful fans sent in stacks of her pictures to help him get through his training period. Additionally, SNSD‘s Sunny, Seohyun, and Taeyeon as well as f(x)‘s Sulli all sent in autographs, letters, and pictures to encourage and support him. “I was such a goofy oppa to them, always joking around. But they’re sweet to do this, and I realized I need to be better to these girls,” he mused.

In closing, he thanked his fans for their continued love and support and saluted like a true soldier. With the approval of his superiors, he was permitted to form a heart with his hands to adorably tell his fans, “I love you“.